You Choose For Europe (But never UKip)

Today the good folk of the UK go to the polls to select who will represent us in the European parliament. This country doesn’t have a great record in voting for Europe (aside from the Eurovision Song Contest of course) and has one of the lower voter turn outs across the continent. This is a worry as the voting method is proportional representation as opposed to the traditionally British election method of first past the post and low turnouts can have a much more significant impact on who actually goes to represent us, the electorate. For example, in the North West region in 2009 the turn out was 31%. Out of that 31%, 8% voted for the extreme far right BNP and their leader, Nick Griffen was duly elected as an MEP for that region. We have to assume that the BNP managed to mobilise all their voters, we can also assume that the vast majority of the 69% of the electorate who didn’t vote would not wish to be represented by someone wish such extreme views. But they chose to leave the voting up to someone else.

And that is the point.

Voting is a choice in this country but it is a privilege that we as a nation appear to have taken for granted over recent times. In history, countless people have lost their lives purely for the chance to vote and many millions of people around the World still do not enjoy the democratic freedom to elect those who purport to lead or represent them in some form or another. We must use the vote wisely, with a well thought out rational as to who we will finally put our cross against inside the polling booth. I have always felt the polling booth to be one of those sacred places in life, one where we go with clear thoughts in our head in regards as to how we as a people select representatives.  For a quiet minute the ballot paper is read, re-read and checked prior to placing a thick well-formed cross in the correct spot. (I still don’t get those who spoil their papers by the way, even as a protest, it isn’t difficult!) The paper is folded neatly and posted, democracy is achieved. We still have to educate those who are new to the process and I see with amusement that on the news today first time voters are being told not to take selfies from within the polling booth.

The other point worth making is that in a way it doesn’t matter who we vote for as long as we actually vote. In the last UK General election 45% of those eligible under 25 years old did not vote whilst for those of retirement age the figure was well over 70%. So what happens? Recent budgets have benefited pensioners. Young people are still struggling to get on the housing ladder. There has been threats to remove their housing benefit and so on. And if we don’t vote we don’t have the right to voice our opinions and to be disappointed with those who eventually were elected.

Which brings me neatly round to UKIP. They are a recent force in British politics led by the carefully cultivated image of a harrumphing pub bore (and former stock broker) Nigel Farage. The sort of person who has a loud voice and drowns out all those who he disagrees with, in turn refusing to listen to anyone with a valid point against him. UKIP are fundamentally a one trick pony with an anti-Europe anti-immigration stand point pandering to the paranoid and playing on stereotypes of certain nations.

In practice, what UKIP and Farage has achieved is to generate the sort of aggressive bigotry not seen in this country since the 1970’s. I don’t like the tone of the debate. I don’t feel comfortable with people making such generalisations based purely on here say and regardless on your views of the European Union I really don’t feel comfortable being represented by those who will do nothing about any of the issues that will arise in the parliament. UKIP are a negative party. They  have no positive policies as far as I can determine and the candidates who will stand to represent UKIP are questionable to say the least. Each day on the run in to the polls there has been one comedic UKIP story where one of them has harrumphed out-of-place and yet the current opinion is that they may get 24% of the vote. What UKIP have been proficient in doing is to mobilise their vote and in a proportional election they may return an increased number of candidates. This would be dreadful for the country and I’m sure the silent majority, those who can’t be bothered to vote would not wish to be represented by UKIP either. But they can’t complain about it. 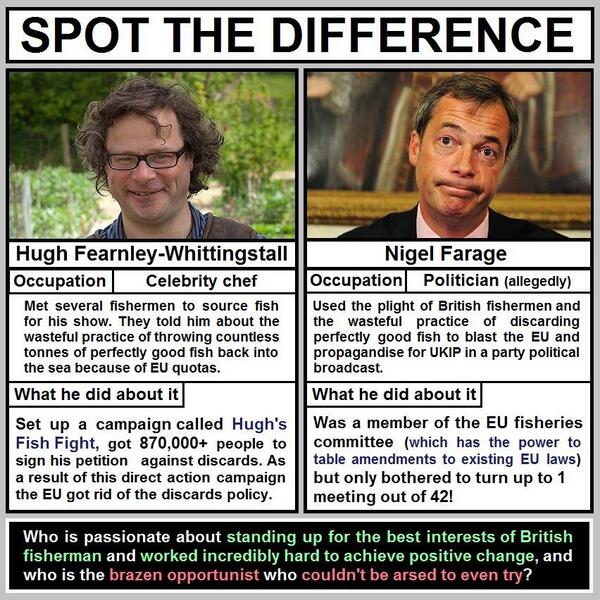 Just over 40 and happy hubby/parent with a fondness for saucy British humour, especially Carry On Films. Nickname of Gremlin aquired at school prior to the film of the same name came out and stayed with me ever since, which I'm rather chuffed about.
View all posts by Graeme →
This entry was posted in Current Affairs, Media and tagged Elections, Europe, UKIP. Bookmark the permalink.

1 Response to You Choose For Europe (But never UKip)